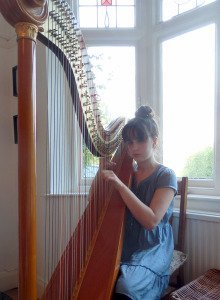 Last year The Amber Trust was proud to congratulate Zoe on being a joint winner of the RNIB’s composition competition to commemorate the centenary of the outbreak of World War I. Zoe’s beautiful 4-part song A Mystic As Soldier was based on words by Siegfried Sassoon and was premiered by the London Youth Choir at the Wigmore Hall on 3rd July 2014.

The previous year, she was one of two winners of the Britten Young Songwriters Competition 2013 (www.fridayafternoonsmusic.co.uk) for her atmospheric song Orford Lighthouse, a setting of a poem by Anthony Horowitz. The work received its first performance in the Snape Maltings Concert Hall and was recorded live at the 2014 Aldeburgh Festival.

But Zoe is more than just a composer. Music plays a huge part in her life, from composition to open mic, and from Liszt to London Grammar. The Amber Trust originally chose to support her ambition to play the harp by part-funding the purchase of an instrument. Amber is delighted that her musicianship is going from strength to strength. She recently gained a Distinction in Grade 8 piano, is taking Grade 8 harp and has been accepted to study composition and piano at the Junior Birmingham Conservatoire from September 2015.