At The Amber Trust, we believe in supporting children with a particular talent or love for music. To help recognise and celebrate the remarkable children that we support, we have launched a new awards scheme called “Amber’s Star”.

We will award this title to one child who has achieved particular musical success, whether this be passing an exam, learning a new piece of music or performing at a concert.

The award could go to someone who has raised funds for Amber by their musical enterprise, or to a recipient of an Amber Music Award who has achieved great progress towards a musical ambition.

In order to be considered for the award, please send us a short summary describing the musical success and, if possible, photographs or videos to support the entry – we would love to recognise each child who is crowned “Amber’s Star” on our website.

If you would like to be considered for an “Amber’s Star” award then please contact us at info@ambertrust.org 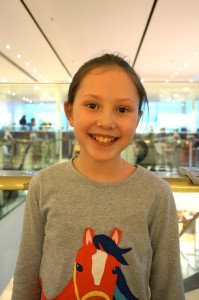 Congratulations to Poppy on becoming the first Amber’s Star. 10 year old Poppy has been an enthusiastic supporter of The Amber Trust since she first heard Derek Paravicini play.

Poppy, a talented musician herself, plays the violin, recorder, oboe and piano and recently gave a sparkling performance as a violin soloist in the Cadogan Hall for a charity concert in aid of Hemihelp.

In 2013, Poppy raised more than £1,000 for Amber giving a concert in Chichester Cathedral and now, having just taken up a music scholarship at the Wells Cathedral Junior School, she is fundraising for Amber again.

Following Poppy’s inspirational talk during her first school concert in the autumn, one of the parents held a Christmas concert in her home raising £720 for Amber.